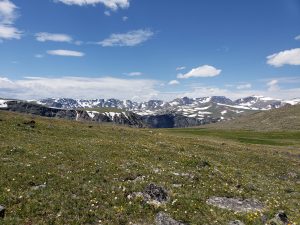 We have continued to have an adventure nearly every week this summer! We have been pushing hard to get out there and it has been wonderful! A couple of weeks ago we went to early service on Sunday morning and decided to drive the Beartooth Mountain Pass after we got home. A couple of the teens had to work and the younger kids didn’t want to sit in the car all day so we ended up just taking our 19 year old and 13 year old.  (Grandparents watched the rest of the kids.) Since there were only 4 of us we were able to drive my husband’s new VW Golf. He was so excited since it gets wonderful gas mileage. We left at 11:30 am and returned at 8:30 pm. 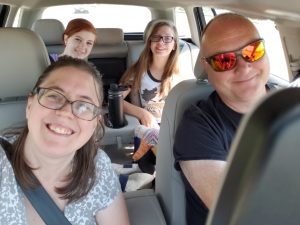 Beartooth Highway runs through the Beartooth Mountains and goes into Yellowstone Park. One part of it is known as the Chief Joseph Scenic Byway and it runs between Cody, Wyoming and Cooke City, Montana. It is an absolutely beautiful drive with breathtaking landscapes, wildlife, and sometimes treacherous roads. There are lots of switchbacks and the road takes you up to an height of around 11,000 feet. 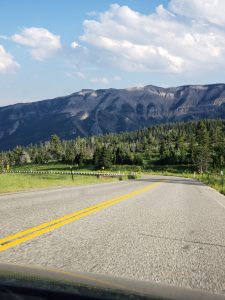 We started our drive up through Red Lodge and our first stop was at the rest stop overlook. There is a wonderfully maintained pathway out to the edge where you can look down on Rock Creek with a beautiful view. There are a ton of chipmunks that are very used to people here. They were climbing on us hoping we had something to feed them. 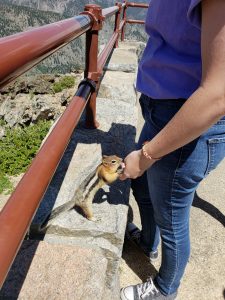 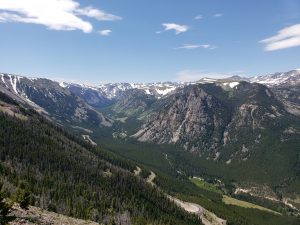 Our next stop was the gate to Beartooth Pass. There is a gorgeous field of wildflowers and rock. Standing here you feel like you are on top of the world or filming, “The Hills Are Alive” from The Sound of Music.

We drove through the snow pack which is still very high considering it was July! It is a very popular trip for most people in our area. I would guess it was around 15 feet high still. I can’t even imagine the hard work it is each year to plow this road! 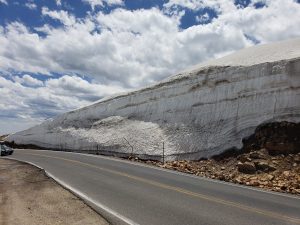 Next we stopped at the Beartooth Mountain Summit. Usually you can drive up to the summit but this year the road was still covered in snow so we had walk through the snow to get there. It is covered in big rocks and little wildflowers. 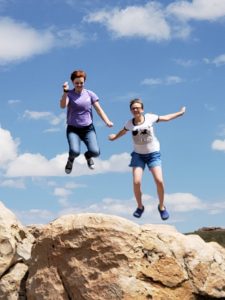 A little further down the road we stopped at Island Lake. The mosquitoes were fierce once they found us but it was a lovely stop with the lake, pine trees and a rushing stream feeding the lake.  I hope to go back after the mosquitoes die down. I could sit there for hours breathing in the fresh mountain air and listening to the sound of the rushing water. 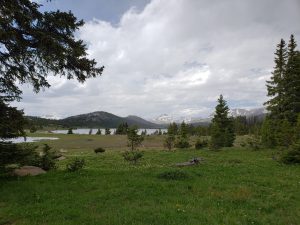 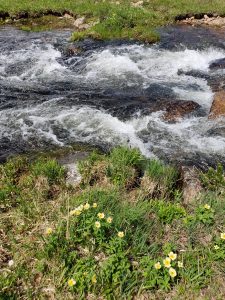 After this we found a great little tourist stop called Top of the World. It had some great merchandise and bathrooms! We got a couple of cute stickers.

One of my favorite stops was next, there is an amazing waterfall! it is a huge, rushing waterfall! The power of that water moving just takes my breath away every time I see it. 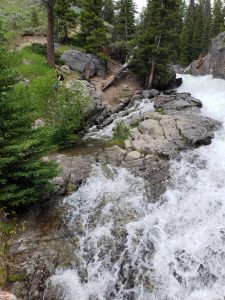 We made it to Cooke City right in time for dinner. We stopped at the Beartooth Cafe while it was still serving the lunch menu. They had delicious sandwiches and burgers. We also stopped in at the Trading Post. They had a ton of great stickers and some fun souvenir t shirts on sale. They also had a taxidermy display for customers which was pretty amazing (although it was a rather violent scene).

Our final stop was at the Clark’s Fork Canyon Gorge in Sunlight Basin on the Chief Joseph Scenic Byway as we were leaving the Beartooth Mountains. My husband and girls had some fun bouldering while I stayed and watched from the top. 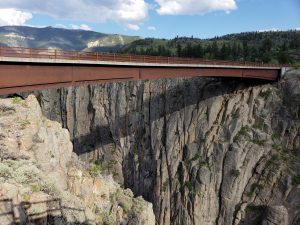 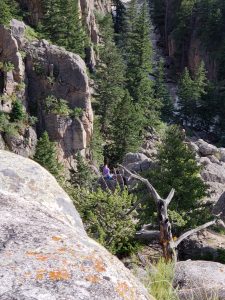 I heard some one say that God reveals himself in two ways: through his Word and through his Creation. Spending Sunday in the mountains appreciating his creation was a wonderful way for us to worship and renew our spirits for another week ahead. We highly recommend you spend a day driving through the Beartooth Mountain pass. 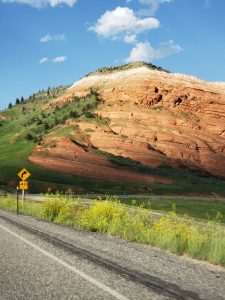 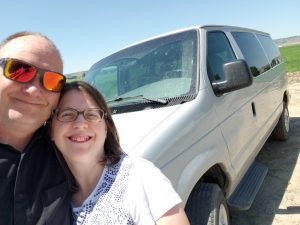 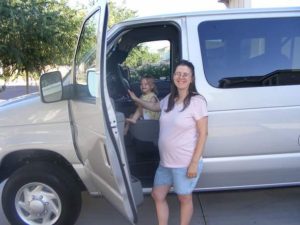 Nine years ago, I was expecting baby number 6 and we outgrew our minivan. The search began and we chose a 12 passenger van for our new to us vehicle. It served us well as we added to our family. It took us on adventures camping, trips to Kansas to see family, back and forth when we moved to Montana, it was great on our trip to Ohio. We could fit all 10 of us plus groceries.

But life has changed. The 10 of us rarely travel together anymore. Our children are growing up and going their own directions. (Half of our family is now drivers! How did that happen?)The gas mileage was terrible, getting 14 mpg at the most. And then there was the winter. Somehow a one ton vehicle with rear wheel drive is ridiculously difficult to get out of the steep incline of our driveway in the snow.

And so it was with a bit of sadness at the thought of not being able to travel all together that we decided this was the year to trade in the van.

While my husband was hanging out at the dealership getting our Kia Sorento serviced he found a 2015 VW Golf Sportswagen. It was one of those cars that got caught up in the scandal. So even though it is a 2015 it only had 160 miles on it when he test drove it. He totally fell in love with it and it brought him back to Geo Metro days only so much nicer! On long trips he has gotten as much as 53 mpg! They gave us a deal too good to resist and so we found ourselves trading in the van. 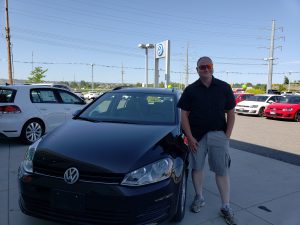 The Kia holds 7 passengers which is plenty most of the time. The rest of the time we just have to take two cars. And wow, driving the Kia is so nice. I was content driving the van but it was an Econoline, which pretty much means no extras. Now I have so many extras I can hardly believe it! I can talk on the phone or listen to things from my phone using Bluetooth, I have a backup camera, a trunk that opens & closes with the press of a button, heated/cooled seats, all wheel drive and so much more. 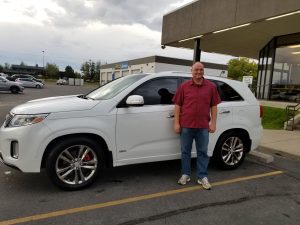 The big van was such a blessing while we had it (and a couple of the kids are still sad that it is gone). I feel so blessed that I get to drive such a nice car and it will be so nice not getting stuck this winter.

I frequently find myself thinking that this is the way things will always be but God keeps showing me that I need to open my hands and surrender my thoughts about my life and be ready for things to change. The harder I hold on the more difficult that change becomes. When I can hold things loosely the blessings are so much more quickly realized. I think I am learning!

Is there anything you have had to let go of lately? What are you learning? 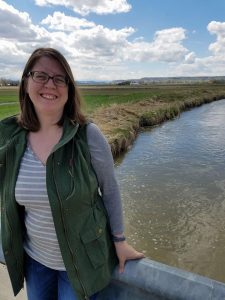